Distinguished Wildlife Artist. Bob Travers, of Fletcher, North Carolina, has international recognition and an overflowing list of awards and credits too lengthily to mention here. Suffice to say that this man has achieved a lofty position in the world of wildlife art, accomplished through a combination of his love of animals, education, and foremost his amazing talent. Known to many as one of the masters of detail, Bob has the unique ability to breath life into the paintings he creates. 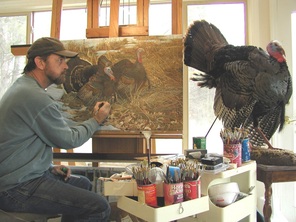