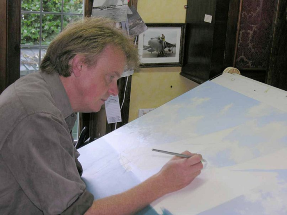 Official website of artist Adrian Rigby, who is universally recognized as a world’s top award winning artist. Adrian’s art includes marine art, maritime art, aviation art and wildlife art. This artist like so many other painters travel the world in search of subject matter. Using reference as the sea in different locales, or animals in their natural habitat. As for aviation art he has taken many many photos to study for accuracy of the intended subject.

ADRIAN C. RIGBY was born in Chorley Lancashire England and studied at Blackpool College of Art 1979-1982.

He was so good as a student that upon graduation he became the teacher where he taught 1982-1985.

His initial art was illustration for books where as a single man he made a nice living for himself. Adrian then discovered that he was a very talented artist using the medium of gouache which is a heavier type of water color. His career as an artist took off when he acquired an agent and signed up with Solomon and Whitehead a major British publisher to sell prints from his original artwork. By the late nineties he was already well known in the UK. By shear luck he met an American in 1999 who became his manager, the manager did for him in the USA what his agent in the UK did for him.

There was more for him to learn however as his manager mentioned that the American market was not as interested in watercolors/gouache for two reasons, one prestige and two sunlight, (a lot of sunlight fades watercolors and gouache). There is a lot more sunlight in the USA than the UK so he self taught himself as many good artists do, to work in both acrylic and oils. Today Adrian works almost exclusively in oils on both sides of the Atlantic.

As a single man Adrian worked both as a hobby and for a living in three studios located in the UK, Florida and Spain. With time constraints and now with a wife, two children and three dogs he now paints for the worldwide market only from his home in Lancashire County England.

He has sold paintings to collectors as far away as Europe, Asia, America and Australia. His work has hung in the Lee Yawkey Woodson Museum and the United States Naval Aviation Museum. His work has sold in Harrod’s and the world famous Tryon Gallery both in London.

Winner of no less than three wildlife art awards, at the juried 5th Annual Open Exhibition of The Wildlife Art Society at Westminster Central Hall in September 1996. Adrian is the only wildlife artist to date to take three top prizes including overall best in show.

Adrian has had almost 40 of his works published, mostly limited editions. However one of his marine works sold over 30,000 that’s thirty thousand prints. Prints not posters, it was the highest selling print for the publisher back then.His images have appeared on Royal Doulton Fine China. A company called Bradford Exchange promotes his images in Australia on clocks and table lamps.

Many articles have been written about Adrian in society magazines like Tampa Bay Magazine and Lancashire Life, (three times). Industry magazines have also highlighted his work including a two page feature recognizing his talent in America’s own Wildlife Art Magazine in May/June 1992 and another article by the same magazine Jan/Feb 2001, they too apparently like his work. Another magazine to feature him twice was American Falconry Magazine where his artwork was on the front cover. Amongst other magazines he was also featured with a multi page spread in Western Art Collector magazine.